skip to main | skip to sidebar

I started a new business for extra income so I can continue to work on my books!

Hello-
Yes, I started my own business as an Independent Beauty Consultant for Mary Kay cosmetics.
I love it so much!  It gives me total freedom to work around my writing instead of fitting writing in with my work schedule.  Everything about it is on my terms with complete flexibility to build my business and write and do my book events or even take a film job, all as I see fit.  How great is that?  So great!
Please contact me for a Sparky the Wonderfish reading and or Mary Kay beauty products!  We could have a party doing both, something nice for mom or dad and the kids!!!
Mary Kay Inc.
Gillian Hutshing
Independent Beauty Consultant
gillianh@marykay.com
http://www.marykay.com/gillianh
Posted by Gillian at 12:29 PM

A lot of great things are happening...

Yesterday I received an email from Adriana Rosales the Library Coordinator at the Washington Accelerated Elementary School to Read & Sign Sparky the Wonderfish: A story of how love creates magic Thursday, April 30th.  Grades K through 5, the school has over 800 students.  They will be pre-ordering books for the event.
As a member of the Advisory Board for The Greater Los Angeles Writers Society (GLAWS)
the President of GLAWS has asked me to Chair the Booksellers Events.  We are joining forces with Barnes & Noble Booksellers.  Our first event is June 13, 14 2009 at The Grove location.  I believe Sparky and I will be kicking off the event.  We are planning to do one Barnes & Noble Booksellers event per month.  Hopefully we can begin the same situation with Borders Bookstores as well.  I would like our first in that series to be the Borders Torrance, CA location.
Good news!  On Friday I called the Barnes & Noble on Pico Blvd. in Los Angeles.  (I went there a few weeks ago and was told they were sold out of the 25 books they purchased for my book signing.)  I asked if they were going to re-order.  I was told, they had already reordered and stocked 7 more books and would continue to do so.  He said at their store alone, they sold 14 books in one month.  He said that is a very good number and suggested I contact more locations to stock Sparky the Wonderfish: A story of how love creates magic...  because it is selling so well!
Sparky and I have been chosen to be a featured author and title at the LA Times Festival of Books at UCLA on April 25th, 26th.
I will be signing books at booth 631.
Saturday, April 25th - from 12:00PM until 2:00PM
Sunday, April 26th - from 2:00PM until 4:00PM
Posted by Gillian at 11:44 AM

Sparky the Wonderfish: A Story of How Love Creates Magic 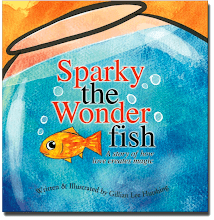 Buy the Book from...